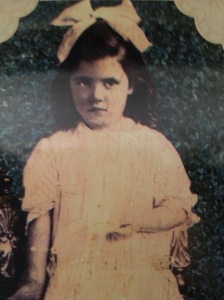 I was three months pregnant with my third son when our  washing machine broke. The tub would fill, spin, and drain but the agitator wouldn’t turn. We had no money and a lot of laundry. Something needed to be done. I rolled my pants over my kneecaps, climbed onto the edge of the washing machine and stomped the clothes clean with my feet and legs. From half inside the machine, I realized that, just for a moment, I had become my grandmother – and I was grateful and astounded such a thing could happen.

If my grandmother was still alive, she would have celebrated her one hundredth birthday yesterday. And by “celebrated” I mean stood up beside the dinner table while everyone else ate. I called her Gram but her name was Thelma, a word now used in our family as a verb describing a hostess who won’t stop working to sit down with the rest of the party. “Nah, I’m fine. You guys go ahead. I’m just gonna Thelma.”

If I lived 600km closer, I would have joined my dad and my aunties yesterday at a big Thelma Day dinner. It looks, from the picture, like they went to one of Gram’s favourite prairie Chinese food smorgasbords.

Gram was loving but not always easy to feel close to. We were close anyway. At size 5, she was one of the few adults I could trade shoes with – not that we ever did swap her hospital inspired Naturalizers for my chunky-heeled boots. We were both oldest daughters of large families who had to take on work as teenagers to help our parents. My load was lighter and I was able to stay in school but when Gram quit in the eighth grade, she quit for good. I never heard her complain but when I graduated from high school at the top of my class she bought me a card and instead of just signing her name, as she usually did, she wrote “very proud of you” and my heart spilt in two. We’re both daddy’s girls, cleaning ladies, fast food super stars — doctor snarking, sibling scolding, hard coughing, cat ignoring, short ladies.

She’s a figure recurring throughout my creative work. The first piece I ever did for CBC Radio was a personal essay for Tapestry about the work Gram and I did together tracing our roots from New Brunswick to Scotland. In my novel, I shamelessly lifted the character of the grandmother who sleeps on a saw bench the night before her husband’s funeral from a scene out of my own childhood, with my own grandmother.

When she was nearly dead and losing her hearing, many voices slipped out of the pitch where she could still hear. But I knew where to find the right range and she could always hear me, right to the end. I stood up to speak at a funeral for the first time when she died.

So I felt like an idiot going to bed after midnight on Thelma Day, the one hundredth anniversary of my grandmother’s birth, without doing anything to observe it. While my family members were eating commemorative dinners, I had done nothing and said nothing about it as I fed my kids a rushed meal before darting off to take the 9-year-old to judo lessons. I had eaten standing up while packing his gym bag. I had dropped him off and driven to the senior’s home where my mother-in-law lives and collected her laundry. I had tried to phone my favourite schizophrenic loved one, found out his line was disconnected, and arranged to pay the bill to hook him back up. There are lots of good ways to observe Thelma Day, even if we happen upon them unknowingly while doing what she would do if she was here.

More than any inspiration she’s given me creatively, Gram inspires me spiritually. For our family, she was a Miriam without a Moses. Her Promised Land is a hard brilliant place without anywhere to sit.  Someday, I hope to stand with her there.