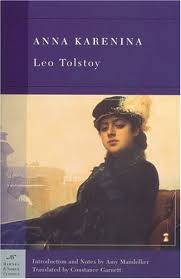 Anna Karenina – Literary Sex and Death without the heebie-jeebies

It’s an odd talent.  I can stand at a shelf, pick up a book I’ve never read before and, if there’s a sex scene written in it, I can instantly turn right to it.  It’s a mixed blessing, I guess.  Books don’t come with parental guides so if I’m trying to see if a book is “appropriate” for my kids, my amazing talent saves me a lot of time.  But it also means I inadvertently end up looking at book-sex when I’d really rather not.

There are a lot of reasons why I’m not a consumer of the new wave of erotica that’s flooding the book market right now.  I keep away from it even though it’s leveled squarely at my demographic – the settled lady with a mortgage demographic.  I keep away from it even though, thanks to ereaders, it can be indulged in more discreetly than ever before.  I am not involved in erotica either as a reader or as a writer.

But stay with me.

This isn’t a polemic about obscenity.  I won’t bother outlining all my reasons for opting out of erotica here.  Instead, please bear with some thoughts about why, despite its popularity, sexual content is so challenging for writers.

Sex is a bit of a mess.  Attempts to write about sex tend to be messes too.  It’s a problem so notorious Literary Review has been doling out an annual award for bad sex in literature since 1993.  The award began as an indictment of “crude, tasteless, and often perfunctory use of redundant passages of sexual description in contemporary novels.”  Despite the threat of receiving an award like this one, raunchy writing – or at least its profile in the mainstream – seems to be at a cultural high mark.  Since I still only read it when I stumble across it with my magic dirty-book opening trick, I can only wonder if this latest proliferation of book-sex means writers are getting any better at composing it.  But the lively competition for the bad sex in literature award seems to suggest that writers are just as inept at depicting sex as ever.

In the past, writers’ attempts to deal with sex in the context of books may have read as prudish and evasive.  The language used to cloak sex was often so oblique it sounded awkward and far-fetched.  We can’t relate to it and end up laughing and scoffing at it.

On the other hand, more recent attempts to write about sex are ridiculous in a different way.  Conventional smutty romance writers tend to mete sex out with silly jargon and clichés used only in their own genre.  More literary books – especially, as some commentators have noted, ones written by men – offer graphic book-sex that reads like nature film narrations filtered through the imaginations of teenaged boys.  It’s crippled by a detached matter-of-factness, dwelling on body parts and fluids.  The very realism of it makes it alienating for readers and we end up laughing and scoffing at it all over again.

Why doesn’t it work?  This might sound maudlin, but there’s a quality to real-life sex that’s ineffable and transcendent.  It goes without saying that it’s hard to talk about what is by its nature unspeakable.  A good writer can write about a transcendent phenomenon but it’s usually done by writing about everything the phenomenon touches and influences rather than by dissecting the actual phenomenon itself.

Think of some of the very best death scenes ever written – like the scene in Anna Karenina where a man dies of tuberculosis.  The reality of the impending death comes across most clearly for me when a servant attending the sick man mirrors his motion of pulling at his own clothes to try to get more air.  The dying man’s body – including the physical mechanisms that are actually killing him – isn’t the central object of the scene.  A lesser writer might have thought he had to make it so.  But even without a narrative full of nothing but choking and coughing, the gravity of the situation – the fear and hopelessness, the final collapse — is still crushing.

I think the same kinds of principles that helped Tolstoy express the impact of death need to be used when authors want to genuinely and sincerely invoke sex in literature.  Sexual content resonates better when it’s barely there – when it’s offered with a reticence that highlights the power sex has to exceed what it physically touches and pervade all the spaces in between everything in its domain.

To write about sex in graphic detail is to demystify it.  Some writers might crow that this is exactly what they intend.  But once sex is demystified, it’s probably not true to our most meaningful and powerful experiences with it anymore.  Real sex should have a mystical element to it.  Without one, it’s just another mess.

2 thoughts on “Speaking the Unspeakable: Sex in Books”