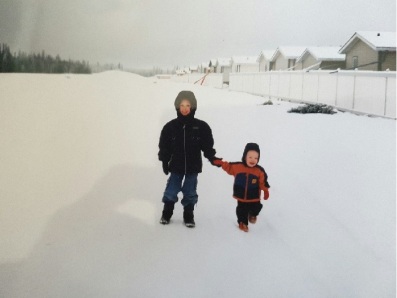 Six months pregnant with my third son, I moved my family to Fort McMurray. My husband went along with it, then fell hard for it. We stayed for five years, had two sons there, bought our first two homes, planted trees, built a backyard fence to rival Stonehenge. Living in the city—in the place, not just at the time–changed our lives. In many ways, it made our lives—mine as a writer and my husband’s as a crime fighter. Today, I sat at a safe distance of hundreds of kilometres and cried at the news coverage of Fort McMurray in flames.

I have never done anything like what today’s Fort McMurray residents have done. I have never been an evacuee. My experiences with forest fire are nothing compared to theirs.

Most years, “forest fire” in the boreal north isn’t so much a freak of nature as it is a season. Forest fire season rolls with the year, like flu season. Everyone in Fort McMurray knows wild fire shares our world while caring nothing for us. Highway 63—the one highway in and out of the city in any direction—passes through large sections of burnt forest standing like skeletons along the road from past fires, hectares of the arboreal version of memento mori. We’ve all seen it. Inside the city, controlled preemptive burns of brush in ditches are a normal part of municipal maintenance. Neighbourhoods are ringed by swaths of grassy clay cleared of trees and known as the fire break. “Where are the kids? Oh, they’re back playing on the fire break.”

While we were living in McMurray, only once did a forest fire encroach on our human world with anything more than smoke. We were coming home after a weekend out of town and were almost at the edge of the forest, where the pastures end and the spruces begin, when we heard Highway 63 was closed about one hundred kilometres south of the city, at Mariana Lake, due to a large fire that had jumped the highway. The highway was open further north, where it connected to the 881—a road I will not call a highway. At the time, sections of it were marked on the map as undeveloped. In places, it wasn’t even a gravel road, just a graded track through a cut-line. We had to decide whether to turn back to Edmonton or press on to Fort McMurray on the 881. We stopped in Lac La Biche, stocked up on groceries, and took to the 881. My husband respected my need to manage stress by taking control and sat in the passenger seat as I drove the road myself in our Mazda 3, our babies strapped into the backseat.

We made it but I suppose it was rash, crazy. We were desperate to get back to our lives in Fort McMurray. We did it because we had to get home.

We had to get home.

During our time in Fort McMurray, our little house on the muskeg and the community of adventurous, open-hearted people all around it, was the only real home we had. If it was in trouble, if it was manageably dangerous for us to be there, we belonged there. I don’t say this to criticize the people who had to leave today—not at all. They did the only thing they could. I say this to empathize in the small way I am able with their grief. I know what I would have risked, what I did risk, to stay home. We are probably not much different from each other. In my way, I have a pale sense of the beginnings of their loss and I am awed by it. I also remember the strength, resourcefulness, the courage of the kinds of people who don’t just work in Fort McMurray but live there, raise families there, build their Stonehenges, open themselves up to experiences that will change and make their lives. I am awed by that too.

Thank you, Fort McMurray. This is not a eulogy, an apostrophe. Let me say, instead, for now, how very much I love you.