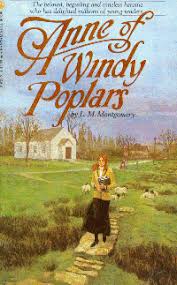 The first epistolary book I ever disliked.

At one point during the painful process of compressing my novel into a tiny synopsis to print on the back of the book, we ended up with a paragraph that described the book as a series of letters.  Letters — I guess the connection between the book’s back cover copy and the title, Love Letters of the Angels of Death, on its front should have been obvious, especially to me.  So it must have seemed pretty strange to everyone else involved when I objected to seeing “letters” mentioned in the synopsis.

I blame L.M. Montgomery for my aversion to the epistolary novel — a work of fiction imagined as a bundle of personal correspondence.  Yes, I said Lucy Maude Montgomery, the Canadian author of the Anne of Green Gables series – the woman I hold personally responsible every time I cringe at a fellow Canadian using “delicious” to describe something that cannot fit into a mouth.  She’s also prone to portraying fat people as bad and birch bark as important enough to interrupt everything with a lengthy description of it.  She might be onto something with the birch bark but she’s definitely wrong about the fat people.

Naturally, after our visit to Prince Edward Island when I was nine, my mum bought me the first book in the Anne series.  Maybe because we moved so much, we were often without many books to read and I was stuck with Anne.  Then came the rest of the series.  I enjoyed the books well enough that I started adding to the collection myself.  They were great resources for soaking up vocabulary and learning to discern the sublime in domestic life.

The worst of the Anne books is Anne of Windy Poplars.  It does nothing to advance the larger story arc.  It’s like a long detour.  And it’s the volume of the series written as a collection of letters.  I must have balked at the idea of the novel I’ve written getting filed in the same letter-book category.  The little girl reader still working somewhere inside my consciousness didn’t want our work to bear any similarities to the book we remember as one of the most boring reads of our adolescence.  Readers accumulate some strange, complicated baggage.

It’s true that my book’s title does contain the word “letters.”  But my book lacks the form and lexicon of letter writing – or even diary writing or any of the other gimmicks that flag a book as epistolary.  There is no “Dear,” no “To Whom it May Concern,” no “Yours Truly” with a signature at the end — not even a token date dashed beside the chapter headings.

I was about to say Anne of Windy Poplars made such an enduring, negative impression on me because it was the first epistolary novel I ever read but then I remembered Judy Blume’s Are You There God? It’s Me, Margaret.  (This one counts as epistolary even though its second person messages are sent through prayers.)  I read this book during the same time period (ahem) as the offending Anne book but I’m fairly certain it didn’t bore me.

With more thought, I realized there were other fictitious diaries and letters I had forgotten on my bookcase.  There’s Bram Stoker’s Dracula, Anne Brontё’s The Tenant of Wildfell Hall, Douglas Coupland’s Hey Nostradamus!, my husband’s copy of C.S. Lewis’ The Screwtape Letters, and Christopher Priest’s The Prestige – a novel I’ve been meaning to return half-read to my brother-in-law for ages.

I enjoyed some of these books – but not all of them.  When I was enjoying them most, their letter-writing form slipped past my notice.  While I didn’t remember that Dracula was epistolary, I do remember getting up at night to quiet my baby while I was reading it and being idiotically afraid of running into undead Lucy in the hallway.  I felt many things for all of these books but I never felt confused or alienated by their narrative styles.  It works.

I’ve over-generalized my dislike for the epistolary form.  Rejecting it was silly – the result of a tenacious childhood prejudice.  I wrote an epistolary novel.  And that’s okay.  It’s not the kind of thing that should amount to a scrap with an editor — though I did feel a little lighter when I flipped my advance reading copy onto its back to read the synopsis and saw the word “letter” had disappeared.

8 thoughts on “Lost in the Post: My Silly Ambivalence for Epistolary Novels”